I first joined the committee of the M.F.C. as an ordinary member in 1956. Of course that was the year that we won our second premiership which we thought was important because that was the Olympic year of Melbourne. When I first joined, Mr. Stan Kelley of Balcombe Rd., Mentone, was our President, Mr. Morrie Dalgleish, Secretary, Mr. George Le Fevre, Treasurer, and committee, Mr. Jack Furmedge, who played for Mentone around about 1922 (grandfather to our present President Warren Fort).
Jack Furmedge held all positions on the Mentone committee other than President and Jack also held every position on the Committee of the Federal District League, who were our governing body (The most difficult position that Jack held at Mentone was as Chairman of the Ladies’ Committee!). Other members of our committee were Doug Patterson (who was a Mentone player in the 1920s), J. Follett, N. McDonnel, Basil Hore (father of Roger), Harold Radford, Jim Blanche, Bruce Gatford, Bill Groves, Jim Coutts, Stan Brew (ex-President), Lt. Col. Charles Weir, Leo Were, Sam Shaw, Sol Soppett (ex-President), Peter Corboy, Cec. Mulvogue, Paddy Mulvogue and Ray Mulvogue.

In 1957 Jack Furmedge and myself were joint Secretaries. During this time Jack took me under his wing and taught me all the things that I needed to know and his home was always open to me day and night. The year 1958 saw me as Secretary and I remained in this position until 1964.

During my time with the club we raised money in several ways. The 1956 season was the year of television, so Morrie Dalgleish ran a raffle for a TV set, but we didn’t make much money. The M.F.C. and Mentone Pre-School (of which I was a member) joined together one Sunday to run a fete. The main attraction was Melbourne Cup winner Rising Fast, which trainer Mr. Bob Hoysted brought to the football ground to be on parade. The ground was packed with people from Brindisi St. all around the oval and at the end of the day both clubs received $1,600-00 each which was a hell of a lot of money in those days. 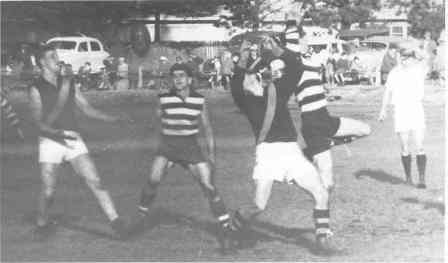 Our coaches have always been good but the two that I remember most include Mick Beckwith, who coached Mentone when we had no club rooms, not many players, and no money.
Mick coached us for no salary. He was dedicated to Mentone, as was his mother. Mrs. Beckwith and Mrs. Shaw were the only two ladies who were Life Members of Mentone at that time.

The other coach I remember was Stan Rule. Stan trained as hard as he trained his players. Stan always maintained that a player must look the part, demanding that all players go onto the field with clean boots and uniform, and that orange peel was definitely not to be left on the oval at three quarter time. Stan also introduced into Mentone the raffle that was called the Black and RED. Before the club rooms were rebuilt our rooms only consisted of the stand and room underneath. The players’ rooms, canteen and front room didn’t exist, nor the room behind the bar. Where the bar now is used to be a large open fire place that always had a fire going during the games and afterwards. The canteen was an old tin shed detached from the main building and standing back where our players room is now, and the time keepers used to have to sit up in the canteen with their heads almost touching the roof and their feet swinging over the counter. 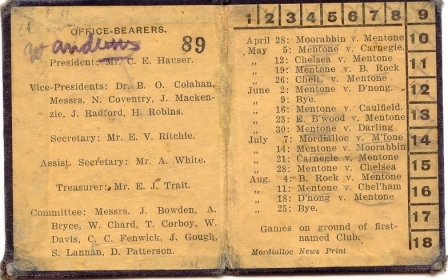 During my years as Secretary I used to wash and dry forty jumpers every week. Quite often I would have to ask Doug Patterson to drive up to the Seymour Army Camp to pick up a player and have him at Mentone in time for the game, and many times Doug or I would have to go to North Melbourne to pick up Joe Carr or Warren Mercer to get them back to Mentone for a game.

I returned to the committee in the early 1980s for three years and during this time I assisted with the canteen and Ladies’ Committee. Pat and Vic Keevers used to cook the hamburgers every Saturday. Margaret Osborne used to run the raffles and look after the younger players. I regret that other names elude me at the moment.

[Jim Lander, a Life Member of the Mentone Football Club, passed away in 1990. The above article is an unedited transcript of his handwritten manuscript.]  Compiled and edited by Rob Hess

1969: Commenced playing with the Fourth XVIII. Finished fourth.1970: Moved into the Third XVIII.

1971: Appointed captain of the Thirds under coach Wayne Bromley. After a successful season, the team was defeated in the Grand Final by Bentleigh, after coming from fourth position.

1973 – 1974: Played in the senior team both seasons and won the Club Champion Award in 1974 playing half-back flank under coach Barry Harrison.

1975: Played in Perth for Subiaco, but after an ankle injury transferred to a local team – Wembley – which won the premiership.

1976: Arrived back in Melbourne mid-season and was lucky enough to be selected for the Grand Final team which won the flag under coach David Groves. (An experience I will never forget.)

1977 – 1979: Continued playing in the senior team, however Mentone were going through a team building program, as well as suffering financial problems. Some personal highlights were the Most Consistent Award (1978 and 1979) and Coach’s Trophy (1979).

1983: Retired from playing after being part of the Reserve XVIII Premiership team.

1993: Chairman of Selectors in Premiership year.

Time for past players to come on Board.
We need your support!