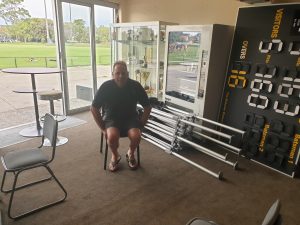 The weather was warm and windy for Wednesday’s senior men’s training session and that meant that the big guns were out on the track – Mark Geschke and James Tyquin. The two of them were really up and about and showed that they have a lot of potential and promise this year. It will be fascinating seeing their progression this season.

There were many other post Xmas first timers tonight – the Membrey boys, Seany Randall, Laddsy, Dancey – many others. As alluded to in Monday’s edition of The Phantom it was clear to see that plenty of work had been done over the summer on the beach weights – special mention to the two Membrey boys.

Tonight we all got to see the new social rooms and facilities close up for the first time post Xmas. There are plenty of opportunities for the club this year both commercially and socially with the new facility. Committee members have been seen drooling over the prospect of such a good facility. The Prez was spotted tonight testing out the sample social room chairs and couldn’t contain his excitement as the atttached photo shows (although we are a little concerned that the Prez has confused his lunch pose with a toilet pose). The Phantom has even been informed that the coaches were eyeing off watching senior games from the corner of the grandstand above the coaches box to give themselves a bit of elevation.

Things are looking positive down at SBMT this year with our senior teams and the potential is there to see. Football clubs can very quickly change from good to great at the flick of a switch. As much as it pains The Phantom to say this, the switch in Richmond should give everyone great confidence about how close any club can be to greatness – sometimes that magic formula is only a fingertip away.

In 2015 who would have thought we would be talking about Richmond the way we are. It’s quite extraordinary. How those supporters of Richmond must be smarting at being an okay to good team finishing around 8th to 9th for many years, only to become great almost overnight once that magic formula just hit and everything clicked. The Phantom once heard the following description of Richmond supporters:

“Tiger fans are notoriously demanding. Arguably they are also the most incapable of coming to terms with losing. They are not like St Kilda fans who see losing as somewhat part of their identity, or Sydney fans who will be unfazed and find another form of entertainment, or Collingwood fans who will be disappointed but still struggle onwards. No, for Richmond fans, defeat is a cut that is almost too difficult to bear. To deal with this psychological turmoil, some fans take proactive action such demanding the removal of the coaches head. In 1981, the need to placate fans led to the sacking of coach Tony Jewell. This was quite a hasty move considering that he had coached the club to a premiership the year before. The club did the same with Francis Bourke in 1983 after he coached them to a grand final in the previous year. In 2001, another proactive fan tried to remedy Richmond’s poor start to the season by dumping a load of chicken manure on the club’s doorstep. Countless others tore up their memberships and posted them back to the club as their way of motivating their beloved Tigers.  Of those who can’t take such affirmative action, alternative strategies are used to deal with their frustration. To their credit, this rarely involves changing allegiances or going to watch a successful VFA or SANFL team (ala Port Adelaide supporters.) No, Richmond fans sometimes stop watching football altogether (other than the Tyquin family of course). When quizzed, they don’t deny that they were once Richmond fans nor do they deny that Richmond meant to the world to them. They simply say things like they “have lost interest in football due to the AFL administration making it a farce. Of course this is somewhat of a lie. In reality, the Tiger fans are gazing upon the AFL from the fringes, keeping one eye on the results whilst pretending not to care. Then once the Tigers start winning again, they pounce back into the fray; cheering like the fans of old. This tendency to disappear only to roar back into life often had the club being labelled the “sleeping giant of the AFL”.

Yes – how Richmond supporters must now be smarting.

How quickly Richmond developed the magic formula should be motivation to all at St Bedes/Mentone Tigers that  so long as the work ethic is there, there is self-belief, we have strong relationships both off and on field, and we all stick fat when things don’t go our way, momentum can change very quickly so that  “just okay or good” can turn to great.

5 more sleeps until the first bounce for the junio

Two of the best haircuts going round! Our Senior M

Under 8’s first training session back this morni

Last season we supported many causes and charities

Happy International Nurses Day to all the nurses i