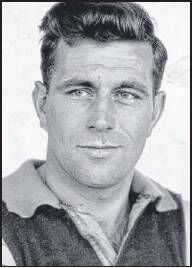 Ted played with Mentone in the late 1930’s and had his football career interrupted with enlistment for service in the Second World War. Ted returned to play 16 games for North Melbourne between 1944-1946.

Suspended by the VFL for crossing without a clearance, Ted had an outstanding career with Brighton in the VFA, playing the 1948 premiership side and as captain-coach of the club in 1954 he won the J.J. Liston medal as the Best & Fairest player in the VFA.

Ted was vice captain of the VFA representative team in the Australian Football carnival and in 2000 was named centre half back in Brighton’s team of the century. This is barely a snapshot of the entire football career of Ted Turner Snr.