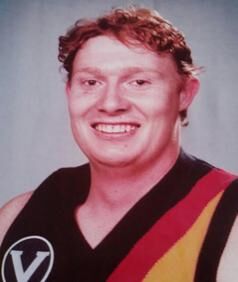 First awarded at the completion of the 1999 season, the Michael Hecker Trophy was struck to remember the contribution made by the cheeky, diminutive & full of life character Michael ‘Bewick’ Hecker who had been tragically lost to us at a young age.

Michael played juniors with St.Bedes OC before playing the first of 57 Under 19 games. In 1990 he played the first of 10 senior games whilst still in the U/19’s for St.Bedes OCFC in 1992 and played twice in the senior team in the 1993 Premiership season, the first for the now amalgamated St.Bedes/Mentone Tigers AFC.

Michael displayed a great desire to play for his team mates and the No. 11 club jumper he wore in his 148 games for the Club.

Tragically taken from us at a young age, it was only fitting that the trophy for the most consistent player in the senior team, based upon the most number of games in which a player is awarded votes by his peers in the Best & Fairest Award, is awarded in memory of the player who week in week out tried his best to win for his team.